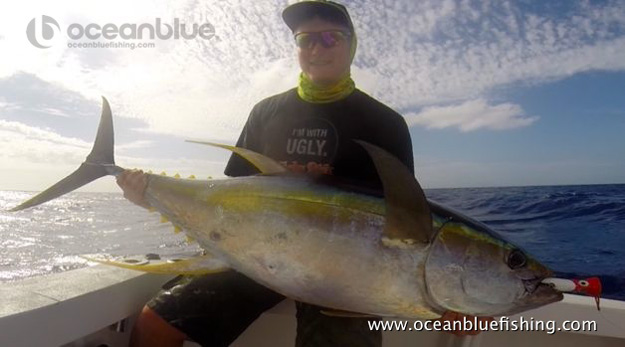 David Whitley & son’s (Dan & Joe) recently joined us on their yearly fishing adventure. Marlin, Yellowfin and wahoo were on their bucket lists. David landed his first ever Blue Marlin estimated at around 70kg. Dan landed his first Wahoo and plenty of healthy Mahi Mahi and Joe managed a great Yellowfin weighing in at 42kg, stoked, as his previous best was 20kg. Congratulations to Joe for getting the “Man of the Match” for landing the biggest fish and scored $100 each from his father (David) and older brother Dan.

“Trees and Fishes, well what can you say, we were waited on hand and foot I had my own personal barkeeps probably as I was the only one drinking, Jeanine and her crew gave us the best hearty breakfasts, ( my 2 boys can eat and she filled them up every morning ), lunches were different but tasty with some differnt tasting delicasises each day ( no one complained ), and dinners which were getting into the 4 course bracket were divine, I’m to old to eat that much food so the boys usually helped me out to make things look good and not upset Jeanine. Believe me, Jeanine did the works for the boys food wise, I love my garlic mash and asked her to cook it for me early in the trip, she said “ try my mash “ I did I’m hooked and I need the recipie for the lumpy, tasty mash that has local things in it that I dont know what they were but tasted Fab, even had it for brekky one morning as she had some left over form the night B4”.
“Top Time, hope to see you next year”.
Team Redback CQ, David, Dan & Joe Whitley

Love your resort….so peaceful, beautiful and staff (especially Jeanine, she was so nice and nothing was ever a trouble.) Helen Gates

The best trip we have ever had together!

It has hands down beat all our expectations. Jeanine has absolutely gone out of her way to make it special and I have never seen anyone who works as hard as she does. Her attention to detail and every guests whim goes beyond anything we have ever seen before. Oh I almost forgot the food […]

This is the place!

Just finishing up a great trip with Oceanbluefishing in Vanuatu. We caught some cracking fish and everything we brought in was distributed amongst the local villages. I couldn’t have asked for more in regards to service and hospitality. If you are looking for a fishing destination, this is the place. Martin Richards

We’ve been twice now and both times have been incredible! Jeanine and her team at the lodge are so accommodating and friendly, making sure you’re relaxed and looked after! Our guide & deckie were knowledgeable and put us into some incredible fish, while being super friendly and giving us some good tips along the way. […]

The staff take exceptionally great care of you, especially Jeanine who goes that extra mile to make sure you are well looked after. The location, the fishing, the accommodation, and the meals are all amazing. Definitely a bucket list place to tick off!! Just come back from my third trip in three years…never disappoints, and […]

We welcome you to Stay & Play with one of our exciting experience packages.

Simply select one of the packages below and we will do the rest.